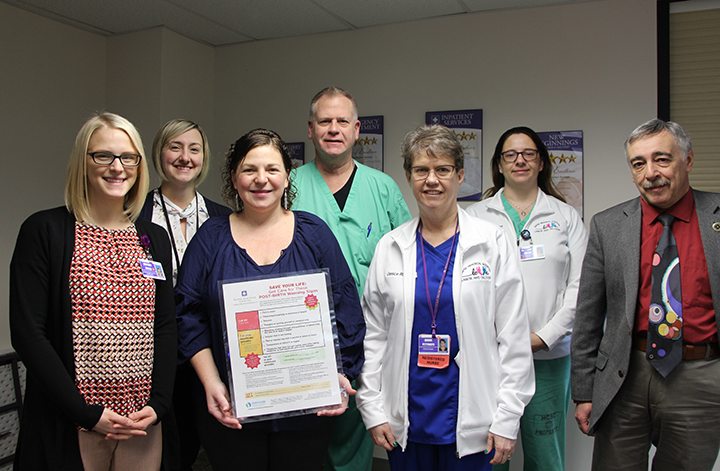 (Honesdale, January 16, 2020)…Giving birth is a joyous experience, but every women’s healthcare provider knows to look for warning signs of trouble. On January 23rd, Maternal Health Awareness Day, Wayne Memorial’s New Beginnings Birthing Suites staff and the providers of the Women’s Health Center, part of Wayne Memorial Community Health Centers, will have an information display in the pedestrian concourse at the hospital to help women recognize symptoms that could pose a threat to them or their baby – during pregnancy or in the first few weeks afterwards, known as the “4th Trimester.”

Preeclampsia is a very serious pregnancy complication that can appear suddenly, usually after 20 weeks of pregnancy or in the first six weeks afterwards. It’s characterized by high blood pressure and signs of damage to another organ system, most often the liver and kidneys. Preeclampsia affects about 6% of all pregnancies and is a leading cause of both maternal and infant mortality. Signs of preeclampsia include swelling of the face, eyes and hands, difficulty breathing, a headache that won’t go away and changes in vision.

Pettinato noted that the most common complications in pregnancy and post-birth are depression and anxiety—affecting one in seven women.

“If a woman has any warning signs during or after pregnancy of depression, such as thoughts of hurting herself, or medical symptoms like excessive bleeding or seizures, they should get help immediately,” she said.

The General Assembly of Pennsylvania declared January 23rd Maternal Health Awareness Day in view of a sobering fact: the number of pregnancy deaths in the United States, according to the U.S. Centers for Disease Control,  has risen almost every year since 1987, from a low of 7.2 deaths per 100,000  live births that year to 16.9 in 2016.

“One of the most important ways a women can protect herself, said Pettinato, “is to attend all her prenatal and postnatal appointments. She doesn’t need to be the only one looking after herself and asking herself if this is normal. We’re here to help.”

Flyers for posting about this article, important information for women:

A free support group designed to help people cope with the grieving process will be offered at WMH. The six-week session will provide support and focus on grief as a... END_OF_DOCUMENT_TOKEN_TO_BE_REPLACED

A free support group designed to help people cope with the grieving process will be offered at WMH. The six-week session will provide support and focus on grief as a... END_OF_DOCUMENT_TOKEN_TO_BE_REPLACED

Free program on communication strategies for caregivers and patients with Alzheimer’s and other forms of dementia. Presented by Wayne Memorial Hospital, Wayne County Area Agency on Aging, PA Link and... END_OF_DOCUMENT_TOKEN_TO_BE_REPLACED

The Stroke Support Group #1 meets on the 2nd Thursday of each month at 4:30pm.  It is held at Wayne Memorial/Good Shepherd Rehabilitation Center on the third floor of the... END_OF_DOCUMENT_TOKEN_TO_BE_REPLACED

Weight Loss Surgery 101, a free seminar for the public, will be held on Wednesday, February 12, at 6 p.m. in the David Katz Conference Room of Wayne Memorial Hospital,... END_OF_DOCUMENT_TOKEN_TO_BE_REPLACED

(Honesdale, January 22, 2020)…A free support group designed to help people cope with the grieving process will be offered at Wayne Memorial Hospital. The six-week session will provide support and... END_OF_DOCUMENT_TOKEN_TO_BE_REPLACED

(Honesdale, January 16, 2020)…Starting February 12 and running weekly through March 25th, a free group clinic will be offered to anyone looking to quit tobacco use. The eight-week program will... END_OF_DOCUMENT_TOKEN_TO_BE_REPLACED

(Honesdale, January 17, 2020)…A free evening of “education and fellowship” on the topic of effective communication strategies for caregivers and patients with Alzheimer’s and other forms of dementia will take... END_OF_DOCUMENT_TOKEN_TO_BE_REPLACED

Patty Wilcha is Wayne Woodlands’ Employee of the Year 2019

(Honesdale, January 16, 2020)… Patty Wilcha was there from the very beginning, when Wayne Woodlands Manor opened in Waymart in 1994, and she’s clearly earned the respect and fondness of... END_OF_DOCUMENT_TOKEN_TO_BE_REPLACED