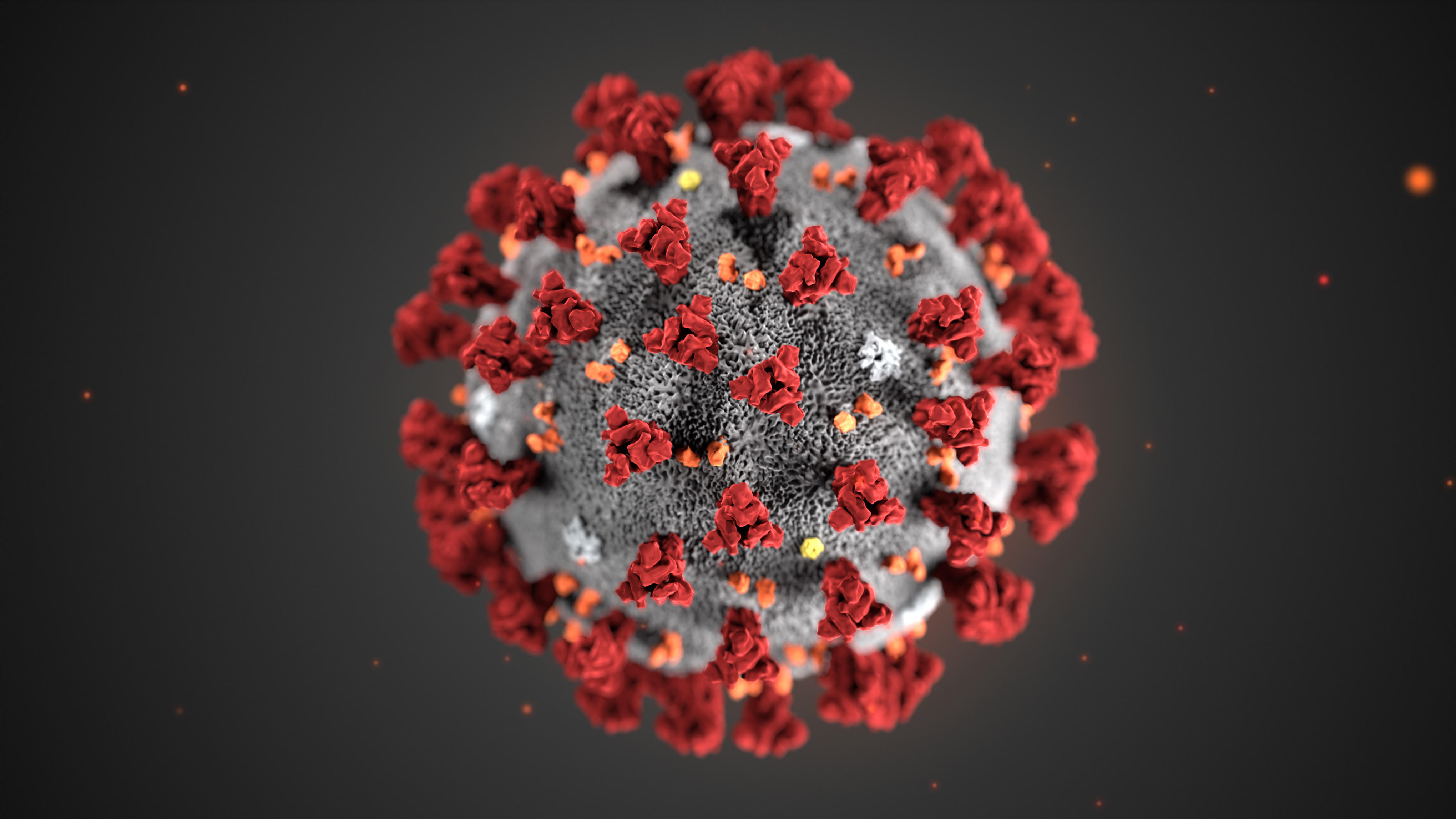 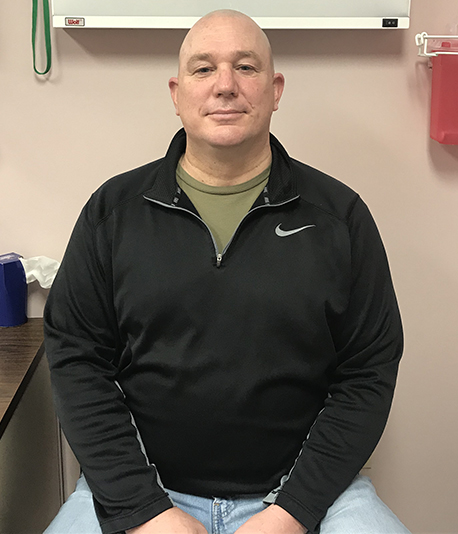 (Honesdale, April 22, 2020)… Today, as Scott Walck recovers from COVID-19 at his home in Lake Ariel, he’s thinking of donating his blood plasma to other victims.  Researchers say the antibodies in his plasma may benefit other patients.  But first, Walck, 52, has to get himself back to normal; he’s not there yet.

Walck was hospitalized twice at Wayne Memorial for COVID-19, nine days the first time and briefly the second time, but viral pneumonia has left its mark. He has pleurisy, an inflammation of the lining of the lungs which causes chest pain particularly when breathing. The good news is that it usually resolves on its own without treatment.  Meanwhile, he is still coughing and can walk only short distances.

It began at work on Friday, March 13th. Walck would prefer not to publicize his work place but says it employs many people who travel. Still he doesn’t recall being exposed to anyone with the virus or to someone who had been to an affected area.  That Friday, he didn’t feel good but kept working. By Saturday, he could barely move. “I was pinned to the wall with a crushing sensation in my chest.”

Walck stayed put in his home (his wife was away) until Monday, when his flu-like symptoms, including sweating and a fever, prompted him to visit Highland Family Physicians in Honesdale, a Wayne Memorial Community Health Center. He tested negative for influenza and the doctor gave him Zofran, a drug for nausea and vomiting. “I couldn’t really eat. I lost 13 pounds,” says Walck, recalling the early days.

On March 20th, his wife insisted he go to the Emergency Department, where he tested positive for COVID-19. He was admitted to Wayne Memorial Hospital’s containment unit constructed specifically for novel coronavirus patients.

“At one point they wanted to put me on a ventilator, but I resisted,” says Walck, “and they said ‘well you don’t have a lot of time,’ meaning I needed more oxygen right then and there.”  Walck knew a ventilator required intubation, an invasive procedure which he would prefer not to go through.  So, instead of the ventilator, Walck was put on an optiflow machine, a non-invasive device which delivers warm, humidified air/oxygen through a patient’s nose.

Walck survived his pneumonia, and on March 29th he was discharged with “17 different medications.”  He hoped for the best but he felt “still shaky.”  His only underlying issue was high blood pressure, and within a few days he had that “sledgehammer” feeling again and his blood pressure spiked to 188/117 (according to the American Heart Association, blood pressure should be under 140/90).  He was re-admitted to Wayne Memorial Hospital.

“The team at Wayne Memorial— Dr. McVeigh, the hospitalists and the nurses—they were phenomenal,” says Walck, “they helped me recover from this with all they had.”

Walck adds that his wife and 17-year-old son both also tested positive for COVID-19, but neither had serious symptoms.

Did he ever think maybe this was it? “Oh, yeah,” says Walck, “I definitely cut some deals with the ‘Big Guy’ while I was in the hospital, and now it’s pay-back time.”

Sean McVeigh, MD, pulmonologist, says, “Scott Walck is one of the many survivors of this virus. While we certainly cannot discount the many people who have lost their lives, by far we have seen more survivors at Wayne Memorial Hospital, and his outlook is good.”

“It was really a life-changing event for me,” says Walck, “and maybe with my plasma donation, I can help someone else.”

(Honesdale, PA, May 26, 2020)… On Memorial Day, May 25th, Wayne Memorial Hospital rededicated its healthcare facility in honor of all area veterans. The event, which included the unveiling of... END_OF_DOCUMENT_TOKEN_TO_BE_REPLACED

ALL NEWS
Kenneth Bannon, PA-C, Named Preceptor of the Year by Marywood University

ALL NEWS
Survivor Happiness — and Grief

EVENTS ALL EVENTS
May
28
7pm
Survivor’s of Suicide Loss

EVENTS ALL EVENTS
May
5
7pm
Alanon

EVENTS ALL EVENTS
May
1
8:30am
Women Only Luncheon Symposium

Come and indulge yourself with information devoted entirely to your health, your mind and your body. We offer a variety of workshops to enrich your life with a renewed sense... END_OF_DOCUMENT_TOKEN_TO_BE_REPLACED

(Honesdale, PA, May 26, 2020)… On Memorial Day, May 25th, Wayne Memorial Hospital rededicated its healthcare facility in honor of all area veterans. The event, which included the unveiling of... END_OF_DOCUMENT_TOKEN_TO_BE_REPLACED

(Honesdale, May 19, 2020)… There were no long lines, but a steady stream of patients did take advantage of Wayne Memorial Hospital’s new COVID-19 testing site in Pike County on... END_OF_DOCUMENT_TOKEN_TO_BE_REPLACED

(Honesdale, May 18, 2020)… In an effort to answer the many questions received about testing for COVID-19, Wayne Memorial Hospital asked its in-house pathologist, Sibyl Rickard, MD, director of Clinical... END_OF_DOCUMENT_TOKEN_TO_BE_REPLACED

(Honesdale, May 15, 2020)… A moving and uplifting ending to a long hard journey for Charles Cocker, 79, of Old Forge.  Cocker’s wife Mary embraced him as he was wheeled... END_OF_DOCUMENT_TOKEN_TO_BE_REPLACED

(Honesdale, May 13, 2020)… Lenore Weisse, Lackawaxen, is one of the first patients to take advantage of newly re-initiated physical therapy services at Wayne Memorial’s Route 6 Mall site in... END_OF_DOCUMENT_TOKEN_TO_BE_REPLACED

(Honesdale, PA, May 6, 2020)…  “You’re a lifesaver! Thank you for all you do.”  That’s what the pins said that were handed out to nurses throughout Wayne Memorial Hospital on... END_OF_DOCUMENT_TOKEN_TO_BE_REPLACED